Played a session with the new armor rules. I went in with each piece having weapon die modifiers, fumble modifiers, armor check penalty modifiers, fractional modifiers. It was overkill and stupid. Here are the streamlined Wasteland Armor rules, and a list of wasteland armor. Additional Pieces
The following do not provide armor dice, but may be worn as additional protection to be sacrificed when armor is damaged. There is an Armor Check Penalty of one for every two pieces worn (round up). 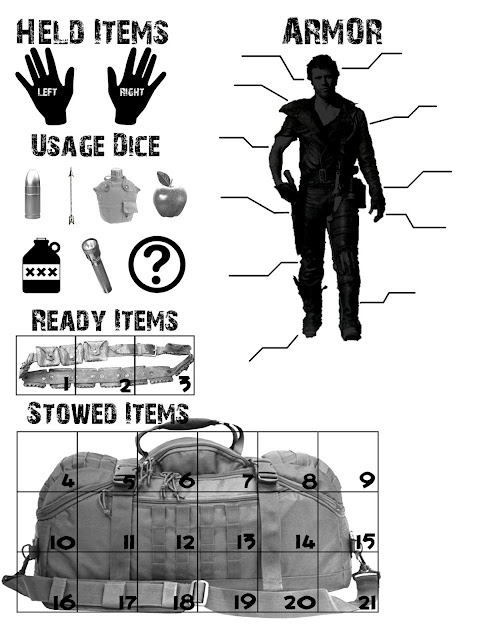 I made this equipment character sheet to simplify tracking the armor. Each piec will go on a little post it that is stuck in the roughly corresponding position. I also made a spot for usage dice (Stolen from +David Black's Black Hack), and the items thing is for a LotFP meets Black Hack, style encumbrance rule set. I also got some ideas for this from Last Gasp, namely having "Ready Items."
PDF of the Equipment Character Sheet.

Very nice! If you are interested, I'd love to develop this into a full article for Crawling Under a Broken Moon. Shoot me an email at crawlingunderabrokenmoon@gmail.com if you would like to discus it.